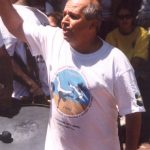 Mestre Suassuna founded his group in 1967. He created the style Miudinho, which is a close game with a high pace and nice movements. Some say it’s Capoeira Angola played very fast. He made several CD’s (Cordão de Ouro I, II, III, IV, Música do Capoeira – Música do Brasil (together with mestre Acordeon)).

Leave a reply Click here to cancel the reply

All for Joomla All for Webmasters